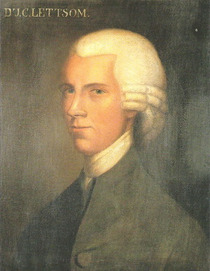 Physician, philanthropist, abolitionist and entomologist. Born British Virgin Islands into a Quaker family. Aged 6 was sent to England to be educated. Came to London in 1766 to train at St Thomas' Hospital. Founder of the Medical Society of London of which he was president on and off, 1775 - 1815.

He signed his prescriptions “I” which prompted this rhyme (of which there are some variant versions):

When patients ill, they comes to I,
I physicks, bleeds and sweats ‘em:
Sometimes they live, sometimes they die,
What’s that to I? I Lettsom.

A noted abolitionist, on the death of his father he returned to the Virgin Islands where he freed the slaves he had inherited. But later, his son, through a wealthy marriage back in the Virgin Islands, brought slaves back into the family and Lettsom inherited them shortly before he died. Thus he died with 1,000 slaves in his estate. He had some explaining to do at the pearly gates.

This section lists the memorials where the subject on this page is commemorated:
Dr John Lettsom

{On a modern information plaque at the foot of this edifice:} Stonework from...

The Bromley by Bow Centre grew out of a church group.  In 1997 they opened th...

Hospital of the Holy Trinity

Erected by Archbishop John Whitgift, after he had petitioned and received per...