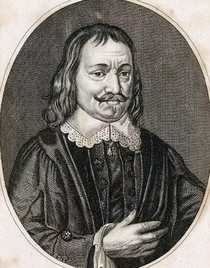 Born in the Netherlands. A distinguished anti-royalist scholar, for Charles I's trial he was assistant to the Solicitor General but did not sign the death warrant. Murdered in the Hague in 1649 by Scottish royalist refugees. Buried in Westminster Abbey.

When Charles II was restored to the throne he ordered the disinterment of the bodies of Oliver Cromwell and his supporters, including Dorislaus, and their reburial in an unmarked pit in St Margaret's churchyard, Westminster.

This section lists the memorials where the subject on this page is commemorated:
Dr Isaac Dorislaus

The ringing of the bell summons MPs to their respective voting chambers. Apar...

Treasurer of St. Bartholomew's Hospital in 1905-8.