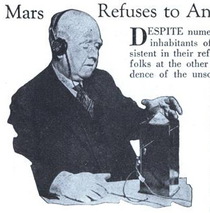 Shoreditch Vestry Clerk (1891–1899) and Town Clerk (1900–1911) and … communicator with Martians.  Our colleague Andrew Behan found Robinson’s other life: between 1918 and 1933 he claimed to be receiving messages from Mars, via radio signals.  He had been taken to Mars by a Martian woman, Oomaruru, who had previously lived on earth, as Cleopatra. Robinson was keen on international publicity for his beliefs and set up a number of transmission ‘tests’.  Some witnesses declared themselves mystified.  The story, told in Hidden Realms, Lost Civilizations, and Beings from Other Worlds by Jerome Clark, involves: the Martian national anthem; psycho-telepathic motor-meters; trumpets; pipe-smoking Martians who drink tea through kettle spouts; a psychic dog named Nell; etc.

The image of Robinson, dated 1929, on this page shows him attempting Martian communication which he first began in 1918.  We have also found an image of him looking sober and conventional in his legal robes, held in the Hackney archives and painted c.1912. Between 1912 and 1918 something happened that created an interest in supernatural communications.  WW1 left many people bereaved and desperate, willing to believe in spiritualism and to be hoodwinked by ‘mediums’, Sir Arthur Conan Doyle being the best known (see WW1 Centenary).  We have found no evidence that Robinson was so bereaved but the atmosphere at the time must have been conducive to stories such as his.

Andrew has also found rather more conventional information about Robinson, as follows:
Hugh Mansfield Robinson was born in 1865 in Howrah, Calcutta, West Bengal, India, a son of Arthur Wellesley Robinson and Eliza Robinson, nee Johnson. His father was a District Carriage Superintendent on Indian Railways. The 1871 census shows him living with his mother and siblings at Vintage House, Yardley, Worcestershire. The 1881 census shows him with his mother and siblings living at 445 Moseley Road, Aston, Birmingham. On 12 January 1895 he married Florence Ada Holt at All Saints Church, Whitworth Mere, Castleford, Yorkshire. She was a Doctor of Medicine and he was a Solicitor. The 1901 census shows them living with their son Leonard Mansfield Robinson, who was born on 21 March 1897 (and went on to marry in California in 1930), at Eversleigh, London Road, Sawbridgeworth, Hertforshire. His occupation is recorded as Solicitor, Town Clerk and his wife is shown as a Physician & Surgeon. The 1911 census lists him, his wife and 6 year old son, John Denis Mansfield Robinson, at Springhead, Hatfield Heath, near Harlow, Essex. Whilst his wife is still shown as a Physician & Surgeon, he is recorded as Solicitor & Town Clerk, Shoreditch Borough Council.

Various electoral registers in 1925-1927 show them both being able to vote as having an interest in 21 Spital Square, Stepney, although their place of abode is shown as 'Thomazines', Epping Road, Roydon, Essex.  The London Post Office Directory of 1934 lists him as 'Robinson Hugh Mansfield, LL.D. clerk to commissioners of taxes (Tower Division), 26A Finsbury Sq. EC2. Tele No NATional 6866'. (LL.D is Legum Doctor, or Doctor of Laws). He died on 23 December 1940 at 'Thomazines', Epping Road, Roydon, Essex, aged 75 years. His estate totalled £1,753-17s-2d.

This section lists the memorials created by the subject on this page:
Dr H. Mansfield Robinson