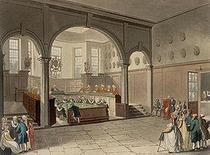 Also called the College of Civilians, this was a society of lawyers practising civil (as opposed to common) law. The buildings where the court proceedings took place also had a big library and rooms where its members lived and worked. They were destroyed in the Great Fire of 1666 and rebuilt in 1672. The society was dissolved in 1865, which quickly led to the sale and demolition of the buildings, in 1867. The society did not cease to exist until the death of its last member in 1912.

This section lists the memorials where the subject on this page is commemorated:
Doctor's Commons

Site of Doctors' Commons, demolished 1867. Corporation of the City of London

Mayor's and City of London Courts

A county court in the City of London, which is the successor to courts pre-da...