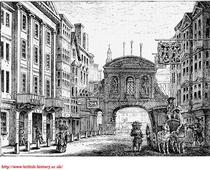 2, Fleet Street. Demolished 1787. Full title was the Devil and St Dunstan, the sign being the Devil's nose being tweaked by pincers wielded by the saint. It appears in a Hogarth illustration. The dramatist Ben Jonson established the Apollo Club here, named after a room in the pub. A bust of Jonson and a plaque carrying a verse used to be mounted over the door of this room. These items, apparently, still exist in Child's Bank which is now on the site.
Members of the Apollo Club included: Shakespeare, Ben Jonson, Jonathan Swift, Oliver Goldsmith and Dr. Samuel Johnson.

This section lists the memorials where the subject on this page is commemorated:
Devil Tavern

Site of the Devil Tavern, demolished 1787. The Corporation of the City of Lo...