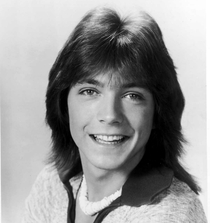 Actor, singer and songwriter. Born in New York, son of actor Jack Cassidy. He became a teenage idol playing Keith Partridge in the television musical show 'The Partridge Family'. He found it difficult to cope with the pressures that fame brought, and was particularly affected by the death of a fan who died following a crush at the White City Stadium where he was performing in 1974. He gave up touring, and focused on stage work, appearing in 'Joseph and the Amazing Technicolour Dreamcoat' and 'Blood Brothers' on Broadway, and also in the latter in London. In his later years he admitted to having an alcohol problem, which may have contributed to his death.

Other memorials to Cassidy in London: a bench in Hammersmith Park and a seat in the auditorium of the Royal Festival Hall.

This section lists the memorials where the subject on this page is commemorated:
David Cassidy

Created as the Philharmonic Society of London, it had an orchestra which init...