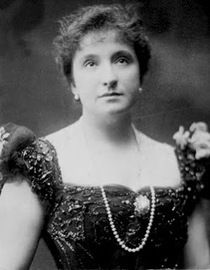 Operatic soprano. Born Helen "Nellie" Porter Mitchell in Melbourne, Australia. 1882 briefly married Charles Armstrong and had one son, but soon separated. She took up a singing career and came to Europe. London initially failed to appreciate her but after success in Paris and Brussels she returned to London and eventually, in 1889, had a big success at the Covent Garden Opera House.  She took the name 'Melba' after her home town. She went on to success across Europe, North America, Australia and New Zealand. Her last performance was in London at a charity concert on 10 June 1930. She returned to Australia and died in hospital in Sydney.

The French chef Escoffier created 4 dishes in her honour: Peach Melba, Melba sauce, Melba toast, and the little-known Melba Garniture. Melba made a number of recordings, here's one.

This section lists the memorials where the subject on this page is commemorated:
Dame Nellie Melba

Composer and pianist. Born Béla Viktor János Bartók in Nagyszentmiklós in the...

Conductor and musicologist.  Born Schenectady, New York, but when he was thre...

Trombonist. Born Pearcroft Road, Leytonstone. He learnt to play in the local ...