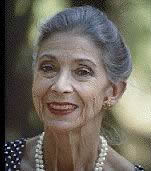 Prima ballerina assoluta.  Born Reigate as Margaret Hookham. As a child lived for a time in Shanghai. Her stage name was based on "Fontes" the name of her mother's paternal family, wealthy Brazilians. Had a 10 year affair with Constant Lambert starting when she was 18 and he 32.  It finished badly with him standing her up at the altar and then marrying someone else.  1955 married a Panamanian politician, Dr Roberto Arias (also described as a gunrunner and whisky smuggler). His uncle was the dictator of Panama at the time and Arias was immediately appointed ambassador to Britain. Fonteyn funded the purchase of the embassy at 17a Thurloe Place where they lived. Panamanian politics are complicated and in 1959 Arias was involved in an attempted rebellion in Panama. Through him Fonteyn befriended Imelda Marcos, General and Mrs Pinochet and Manuel Noriega. She was herself involved in acquiring guns for revolutionary purposes (indeed was once caught and deported) and funding them by her dancing.  In 1964, as an elected politician Arias was crippled in a shooting "accident" involving a former political associate, though it is also said that the gunman was the husband of a woman with whom he was having an affair. Effectively a quadriplegic he was thereafter looked after by his wife while she continued her dance career. This did not stop him having an affair with his secretary/nurse.

Discovered by Ninette de Valois. The choreographer, Frederick Ashton, created roles for her, such as the Firebird and in the 40s and 50s she reached the pinnacle of her profession.  Was performing in Holland when Germany invaded.   A huge success in New York and on a US tour.  In 1962 Fonteyn's ballet career found new life in her partnership with Rudolf Nureyev. Although he was 19 years her junior their friendship was very close, possibly more. In 1970 she retired to live with her husband in Panama running a cattle farm, where she died.

Much of the information above comes from Tony Palmer's 2005 documentary Margot where her former friends and colleagues are interviewed. If true, she did lead an extraordinary life.

This section lists the memorials where the subject on this page is commemorated:
Dame Margot Fonteyn

Plaque unveiled by Darcey Bussell. 'Prima Ballerina Assoluta' is a title, nor...