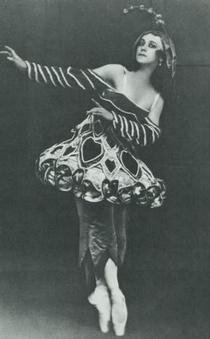 Ballerina. Born in St Petersburg, Russia. Leading ballerina with Sergey Diaghilev's Ballets Russes from its beginning in 1909 until 1922, often paired with Nijinsky. Married British diplomat  Henry Bruce in 1917 and moved to London.

A Guardian report on the purchase of a portrait gives "Karsavina went on to help establish the Royal Ballet in London and to privately coach prima ballerina Margot Fonteyn, as well as designing the syllabuses for the RAD {Royal Academy of Dance} in 1954."

This section lists the memorials where the subject on this page is commemorated:
Tamara Karsavina

Ballerina. Danced for Diaghilev, and opened a ballet school in 1916 in London...