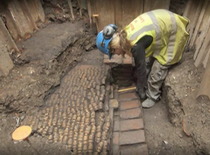 American impresario. Owned the St James's Theatre from 1943 to its demise in...

Born in Coventry. From an acting family her stage career started at age 8. Wh...