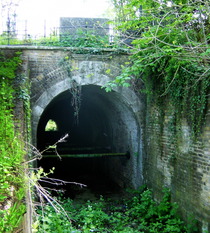 The New River had to be carried over Salmon's Brook (now dry).  To do this a 660-feet long lead-lined wooden aqueduct was built in 1608-13, known as the Bush Hill Frame. At the same time a bridge (presumably for the footpath/road) was constructed.  In 1682 the bridge was replaced with a barrel vaulted tunnel, known as the Clarendon Arch. It was rebuilt in 1725.  The New River continued to be carried over the Brook in the Bush Hill Frame.  We read that in 1786 this was finally replaced by the present clay embankment.  This is odd since embankments hold back water, they don’t carry rivers.  What it seems to mean is that the tunnel was extended so that it carries not just the road but the river as well.

The picture shows the north-west entrance to the tunnel, and the plaque above.

This section lists the memorials where the subject on this page is commemorated:
Clarendon Arch

Junior Assisant 4th Engineer on the RMS Titanic. There would appear to some ...

From their website: "Wrekin is a leading UK designer, manufacturer and suppli...