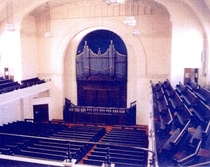 A Grade II listed building designed in the Byzantine Revival style by Robert Fellowes Chisholm. In its heyday it had congregations of up to 1400, but as attendance diminished, they moved to a smaller church and the building was closed. In 2000 it was purchased by Cadogan Estates Ltd. and following refurbishment was opened as The Cadogan Hall in June 2004. It produces an eclectic range of concerts, and is also used as a recording studio. Its stained glass was designed by a Danish nobleman, Baron Arild Rosenkrantz.

This section lists the memorials where the subject on this page is commemorated:
Church of Christ Scientist - SW1

The two dates indicate the beginning and end of construction, often marked wi...

Built as a memorial to Britain's only assassinated Prime Minister, Spencer Pe...