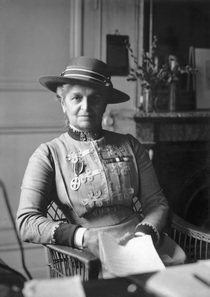 Army Martron-in-Chief. Born Emma Maud McCarthy in Australia. In England by 1891, training as a nurse at the London Hospital, Whitechapel. Served in the South African War, 1899-1902, with the Army Nursing Service Reserve. Promoted to Matron in 1903. Served in France in WW1, as matron-in-chief of the British Expeditionary Force in France and Flanders. Retired in 1925. Died at her home at Chelsea,

Her year of birth on the plaque is given as 1858 but the Australian Dictionary of Biography gives 1859.

This section lists the memorials where the subject on this page is commemorated:
Dame Maud McCarthy

The British Reserve Army was formed in May 1916 and renamed as the Fifth Army...

Established in 1903 it continued until 1958 when all British naval reserve fo...