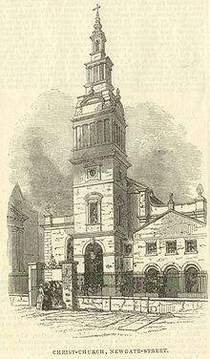 An information board at the site reads: "Christchurch Greyfriars churchyard covers the site of the church of the Franciscan monastery which stood here from about 1228. The original church was demolished in 1306 and a new one built in 1325. This stood until it was demolished by the Great Fire of London in 1666. the church was rebuilt by Sir Christopher Wren between 1687 and 1707 on the site of the quire of the old building. the churchyard became an open space in 1872, and the church remained until it was gutted by bombs in December 1940."

London Garden Trust says: " This lovely garden is located on the site of the Franciscan Church of Greyfriars, which was established in 1225. Numerous well-known people, including four queens, were buried in the old church, which was destroyed in the Great Fire of 1666. A new church, designed by Wren, was completed in 1704. In 1940, incendiary bombs destroyed the body of the Wren church, and only the west tower now stands. The 1989 rose garden reflects the floor plan of the original church with box-edged beds representing the original position of the pews. An avenue of trees marks the former nave."

Greyfriars Church was not destroyed in the Reformation, only closed. It was reopened in 1547 as Christ Church and continued in use as a parish church until the Great Fire in 1666.

The Citizens' Memorial is a campaign to partially rebuild this church and transform it into a memorial of national significance to commemorate the heroism and sacrifice of the citizens of London during the Second World War.

This section lists the memorials where the subject on this page is commemorated:
Christchurch - Greyfriars Church

Christchurch - Greyfriars This Wren church was destroyed by fire-bombs in De...

Building pulled down and the parish united for ecclesiastical purposes with t...

Wesley attended a meeting convened by James Hutton in Nettleton Court, off Al...