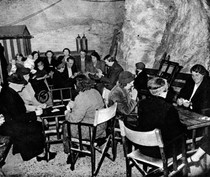 'Caves' is a misnomer, as they are entirely man-made chalk and flint mines. The earliest mention of them is around 1250, and it is believed that they were last worked in the 1830s. In World War 1, they were used as an ammunition dump, and for mushroom cultivation in the 1930s. During the Blitz they were an air raid shelter, becoming an underground city of about 15,000 inhabitants, with electric lighting, a chapel and a hospital. They are now a tourist attraction.

This section lists the memorials where the subject on this page is commemorated:
Chislehurst Caves

Chislehurst Caves People came from across London and north west Kent to shelt...

The maypole, comparable in height to that of the adjacent tower of St Andrew ...