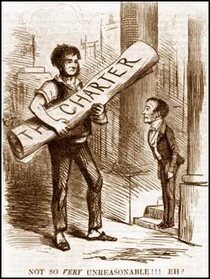 Chartism was a working-class movement for political reform in Britain, which took its name from the People's Charter of 1838. It began among skilled workers in small shops, and handloom workers in Lancashire and the Midlands. The charter called for six basic reforms to make the political system more democratic:
Every man over 21 who was not a criminal or insane should be allowed to vote.
Voting should be done in secret,
Candidates should not need to be rich or own property to become a Member of Parliament.
All Members of Parliament should be paid for doing their job.
All electoral areas should represent the same number of people.
Elections should be held annually.
Although the movement didn't directly achieve any of its aims, the Reform Act of 1867 and the Ballot Act of 1872 introduced all their original demands, except for annual elections.

This section lists the memorials where the subject on this page is commemorated:
Chartists

The One Bell Inn Public House. Crayford Chartists held their first meeting he...