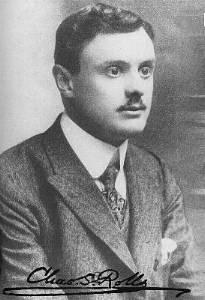 Born 35 Hill Street, W1, son of Lord Llangattock, John Rolls. A keen racing cyclist, he became the fourth man in England to own a car, took to racing cars and repeatedly broke the land speed record. Met Henry Royce in May 1904 and together they began manufacturing cars, the first being the Grey Ghost. He was a keep-fit enthusiast, sports-player, teetotal and vegetarian. Frequent balloonist. One of the first to fly with Wright, the aeroplane inventor, and the first to fly an aeroplane non-stop across the English Channel and back. He left Rolls-Royce in 1910 over disagreements about the manufacture of aircraft. Died at Bournemouth, aged 32, in a flying accident, the first Englishman so to die. There is a statue at the site.

This section lists the memorials where the subject on this page is commemorated:
Charles Rolls

Pioneering aeronautical engineers. Oswald and Eustace formed a partnership in...

At this time post offices were 10-a-penny (cheaper than the stamps they sold,...