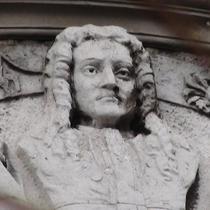 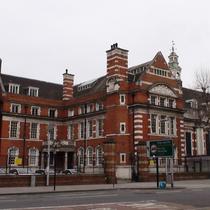 {Under the bust:}
Science Philosophy

At first we thought this was Henry Leeke, the founder of the school but Ornamental Passions are confident that it is Newton. Given that the figures either side represent Science and Philosophy Newton is surely right.

Our picture only shows a part of this large building, by E. W. Mountford, 1892-4. Built as a school it housed Lambeth College for a time and in 2008 there were plans to turn it into a hotel. 2011, and it's looking rather sad.
On the facade are three arched pediments with sculpted reliefs as follows, left to right:
- Newton
- two lounging school-boys and the dates 1571 - 1894.
- Homer.

Ornamental Passions have some good pictures and the sculpture, probably by Montford, is rather fine.  We have also accepted their identification of the two busts which we are sure is right.

This section lists the subjects commemorated on the memorial on this page:
Newton bust

This section lists the subjects who helped to create/erect the memorial on this page:
Newton bust

This section lists the other memorials at the same location as the memorial on this page:
Newton bust

The terracotta plaque and Nabresina stone tablet, were commissioned by the re...