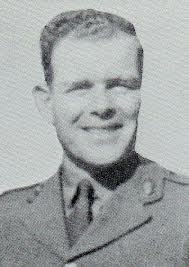 Royal Engineer killed defusing a bomb. Awarded the George Cross posthumously and Blaney Crescent, E6, where we understand there is/was another plaque, was named for him. Blaney had already defused two other bombs in the area now known as Newham, at Manor Way and Park Avenue.

Andrew Behan has kindly carried out some research on this man: Captain Michael Flood Blaney, G.C. was born on 14 November 1910 in Newry, County Down, Northern Ireland, the son of Charles and Alyce Catherine Blaney. His father was a Civil Engineer. The 1911 census shows the family living at 29 Drumalane, Ballybot, Newry, South Armagh. He joined the Royal Engineers, Service Number 119978 and was a bomb disposal officer. He had successfully defused several bombs on 18 September and 20 October, but was killed, aged 30 years, on 13 December 1940 attempting to render another bomb safe in Manor Park.

He was posthumously awarded the George Cross and the following details are given in the London Gazette of April 15th, 1941: "The King has been graciously pleased to approve the award of the George Cross, for most conspicuous gallantry in carrying out hazardous work in a very brave manner." On 5th December 1940 an unexploded bomb had fallen in premises at 590 Romford Road, Manor Park, London. This was causing a serious disruption to traffic movements and on 13th December Capt. Blaney attempted to remove the fuse, alone, the way he always insisted upon working. He crawled into the crater and tackled it whereupon the bomb exploded and Capt. Blaney lost his life. He was buried in the Old Ground Section of Newry Old Chapel Roman Catholic Cemetery, in Newry, Northern Ireland.

This section lists the memorials where the subject on this page is commemorated:
Captain M. F. Blaney