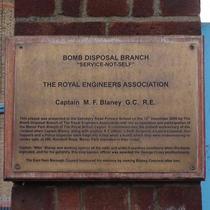 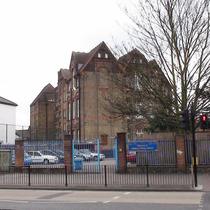 Bomb Disposal Branch
"Service-not-self"
The Royal Engineers Association
Captain M.F. Blaney, G.C. R.E.
This plaque was presented to the Salisbury Road Primary School on the 13th December 2000 by The Bomb Disposal Branch of The Royal Engineers Association with the co-operation and participation of the Manor Park Branch of The Royal British Legion. It commemorates the sixtieth anniversary of the incident when Captain Blaney, along with another RE officer, a Staff-Sergeant, a Lance-Corporal, five Sappers and a Police Inspector were tragically killed when a bomb which they were endeavouring to render safe, at 590 Romford Road, Manor Park exploded in their midst.
Captain "Mike" Blaney was working against all the odds and under hazardous conditions when the bomb exploded, and for his gallantry, this courageous officer was awarded the George Cross posthumously.
The East Ham Borough Council honoured his memory by naming Blaney Crescent after him.

From Newham Stories (2018: that link not working but Newham Story has the text) we learn that there used to be another plaque commemorating Blaney and his colleagues:
"As well as Blaney, nine other men men died on the 13th December 1940 when a UXB was found below No.590 Romford Road, Manor Park. The men were killed when attempting to remove the bomb so access could be gained to disarm it.
From the London Gazette April 15 1941: The King has been graciously pleased to approve the award of the G.C (George Cross) for most conscious gallantry in carrying out Hazardous Work in a very Brave Manner to 2nd Lieut. (Acting Captain) Michael Flood Blaney, B.Eng 11997 Corps R.E (Royal Engineers).
In 1949 it was recommended to East Ham Council by the Housing Committee that a new street on the Gooseley Housing Estate was named Blaney Crescent in his memory. The Royal Engineers (Bomb Disposal) Old Comrades Association asked if they could provide a Memorial Plaque, so the street name plate was redesigned to incorporate this plaque. The Plate, made of Bronze has the street name in Roman lettering in cream Enamel. The inscription, cut in it said, 'Dedicated to the memory of Captain Michael Flood Blaney of the 64 Bomb Disposal section R.E who was killed in this District on the 13th December 1940 whilst engaged in the removing of a Unexploded Bomb'.

Those killed in this incident were {the list of the 10 men is given here in Subjects Commemorated}. The memorial was dedicated on the 15th April 1950. The Memorial Plaque and the accompanying brick work disappeared many years ago and the space is now used to park cars (Lest we Forget?). Blaney had already defused two other bombs in the area we now know as Newham, at Manor Way and Park Avenue."

Royal Engineers Bomb Disposal (EOD) Branch have a description of the incident.

This section lists the subjects commemorated on the memorial on this page:
Captain Blaney & colleagues, E7

This section lists the subjects who helped to create/erect the memorial on this page:
Captain Blaney & colleagues, E7

Losey died in this house.

This Memorial Garden, re-dedicated in 2009, commemorates the residents of Wes...