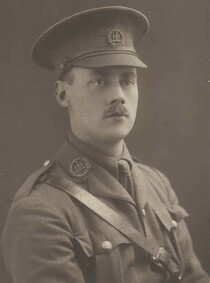 Second Lieutenant Cecil Henry Viney was born at 6.15pm on 24 May 1891 at 'Fairholme', Greenhills, Harrow, Middlesex, the elder child of Cecil Thomas Viney (1861-1925) and Ada Maud Viney née Smith (1861-1922). On 27 June 1891 he was baptised at St Mary's Church, Harrow, and the baptismal register shows that the family were living at Greenhills, Harrow with his fathers occupation being recorded as an accountant.

On the 1901 census he is shown as living at 38 Westmoreland Road, Beckenham, with his parents and sister Dorothy Iris Viney (1895-1985). He attended Westminster School, from 1905 to 1907 and was a Royal Academy Schools student from 21 March 1911. The 1911 census shows him residing at the home of his maternal aunt, Florence Smith, at 2 St George's Mount, St Johns Road, St Leonards, Hastings, Sussex.

The London Gazette confirms that he was commissioned as a Second Lieutenant in the 3rd Battalion, Northamptonshire Regiment on 15 August 1914. He was attached to their 2nd Battalion when he went missing, presumed killed in action, aged 23 years, on 9 May 1915. Our picture source gives details of his military service. As he has no known grave he is commemorated on Stone 7.H. on the Ploegsteert Memorial to the Missing, Berks Cemetery Extension, Rue de Messines, Comines-Warneton, Belgium.

Probate records confirm that his home address had been 'Dartmouth', Durham Avenue, Bromley and that he died at Formelles, France. Administration was granted to his father on 11 July 1916 and his effects totalled £785-3s-9d. His army effects totalling £50-15s-0d were sent to his father om 16 August 1916. He was posthumously awarded the 1914-1915 Star, the British War Medal 1914-1918 and the Victory Medal which were sent to his father on 18 May 1921. He is also commemorated on the Bromley War Memorial at Martins Hill Open Space, Glassmill Lane, Bromley, BR2 0XH. He was also commemorated on the war memorial at Westminster School, but this memorial was lost when school was bombed and burnt out in 1941.

This section lists the memorials where the subject on this page is commemorated:
C. H. Viney