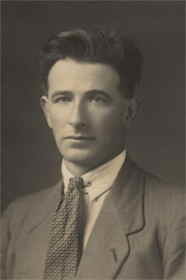 Third Engineer Officer Leslie Caird was born on 8 April 1896 in Kaiangita, Otago, New Zealand, the sixth of the twelve children of John Caird and Jane Caird née Petrie. On 9 August 1933 he married Elsie Elizabeth Trail at the First Presbyterian Church, Invercargill, New Zealand and they had both a son and a daughter. The son, Brian Thomas Caird was born on 21 July 1937 in Penang, Malaysia.

He was appointed the Third Engineer Officer of the China Navigation Co Ltd owned S.S. Sinkiang, a 2,646 tons cargo vessel, and was aboard her when it left Calcutta (now Kolkata) along the Hooghly River at 18.00 hours on 4 April 1942 bound for Columbo, Ceylon (now Sri Lanka). Early in the morning of 6 April 1942 it was sighted by an aeroplane from the Japanese aircraft carrier Ryujo and an unsuccessful attempt was made to bomb the ship. Later that morning a Japanese cruiser closed up on the Sinkiang and sank it with gunfire. Several of the people aboard the Sinkiang survived in lifeboats, but Leslie Caird was not one of them. He was lost at sea, aged 45 years, and is commemorated on Panel 98 of the Mercantile Marine Memorial, Tower Hill, London.

This section lists the memorials where the subject on this page is commemorated:
L. Caird