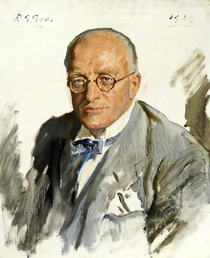 Novelist. Born Hugh Seymour Walpole in Auckland, New Zealand. He was educated in Britain and became a schoolmaster before turning to authorship. His novels include 'Mr Perrin and Mr Traill', 'The Dark Forest' and 'The Secret City'. Knighted in 1937, he died at his home, Brackenburn, Manesty Park, Derwentwater, Cumberland.

This section lists the memorials where the subject on this page is commemorated:
Hugh Walpole

Diplomat and politician. Born as Harold George Nicolson at the British legati...

Dermatologist and author. He wrote 'A Biographical History of British Dermato...