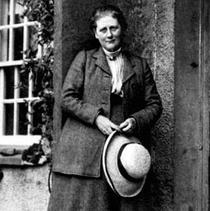 Artist, writer and sheep breeder. Born Helen Beatrix Potter at 2 Bolton Gardens, South Kensington where she lived in the third floor nursery until she was in her thirties. She used her second name to distinguish herself from her mother. Her first book, 'The Tale of Peter Rabbit' came about through the illustrated letters she sent to the children of her last governess.

In 1905, aged 39 and in opposition to her parents, she became engaged to her editor Norman Warne, who died only weeks later. With the success of her 'little books' she bought Hill Top Farm in the Lake District and lived there alone for part of each year. Here she became a prize-winning breeder of Herdwick sheep. Her parents were also not happy when she finally, aged 47, married William Heelis. Died at Castle Cottage, near Sawrey, Cumbria.

This section lists the memorials where the subject on this page is commemorated:
Beatrix Potter