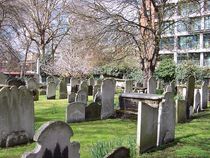 Nonconformists burial ground. Enclosed with a brick wall by the City of London in 1665; gates added 1666.

Closed in 1852 by which time it held more than 120,000 bodies.  In 1865, to preserve the land from development the City of London formed the Bunhill Fields Preservation Committee which restored some of the monuments and laid the grounds out as a public garden, opened 14 October 1869. The ground was badly damaged in WW2 but restored in 1964.

This section lists the memorials where the subject on this page is commemorated:
Bunhill Fields Burial Ground

We cannot find anything about this group. There is a site called the Ancient ...

Kelsey Park is in Beckenham, Kent. The objectives of the group are the conser...