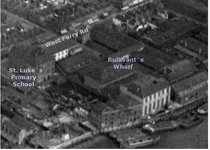 Isle of Dogs - Past Life, Past Lives is an excellent post about this event, with eye-witness accounts, from which we have drawn this brief summary:

Bullivant & Co were wire rope-makers with a large wharf/warehouse/factory covering the area between Westferry Road and the river, where the plaque now is. The ground floor of the two-storey waterside building was an official WW2 public air raid shelter.

The official report gives the capacity of the shelter as 600 but on the night of the fatal air raid its population was about 120, of which 44 were killed (though only 41 names were listed) and 60 injured.

For more information about this sad event and the Isle of Dogs generally See Mick Lemmerman's book The (Old) Isle of Dogs From A to Z.  Our image comes from Lemmerman's website but it originates at Britain from Above.

This section lists the memorials where the subject on this page is commemorated:
Bullivant’s Wharf - WW2 bomb