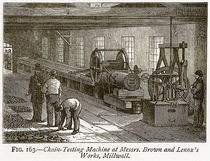 Created as Brown & Co, by Samuel Brown, a Naval Captain. Became Brown Lenox & Co in 1828 following Brown going into partnership with his cousin, Samuel Lenox in 1806. The West Ferry Road works were opened in 1812 and large works in Pontypridd in 1816 (closed in 2000 and demolished).

From GLIAS: "Brown, in about 1812, made a large testing or 'proofing' machine, at his manufactory at Mill Wall, more than 50 years before Kirkaldy built his still famous machine."

This section lists the memorials where the subject on this page is commemorated:
Brown Lenox & Co

Part of the Regent's Canal. Built in 1820 to allow boats to moor and unload c...

Fromed at the Chilean Embassy at 3 Hamilton Place. In 2008 The British Chilea...