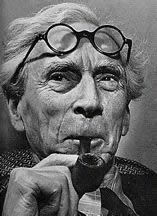 Philosopher, logician, essayist, social critic and campaigner for peace. Third Earl Russell. Born Ravenscroft, Trelleck, Monmouthshire. A bad start in life - his mother, sister and father all died when he was an infant. He was then brought up by his grandparents in Pembroke Lodge, Richmond Park, his grandfather dying when he was six. His personal life was seldom happy, with 4 wives and unhappy offspring. Had a prominent academic career, publishing books on maths and analytic philosophy. Controversial atheist and anti-war campaigner. Died at home at Plas Penrhyn, Penrhyndeudraeth, Merioneth. He was the inspiration for Professor Yaffle, a character in Oliver Postgate’s children’s TV series, Bagpuss.

This section lists the memorials where the subject on this page is commemorated:
Bertrand Russell