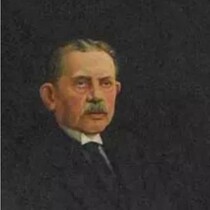 Tobacco manufacturer and philanthropist. Born in what is now Belarus. His father took him to the United States when young; and there, after working at a tobacco factory, he began making the newly popularised cigarettes by hand. He invented a cigarette-making machine which he brought back to England and sold for £160,000. With this money he bought the tobacco business of Mme. Carrera in 1903. Later he gave funds to hospitals and a trust he set up funded the building for St George's Settlement. Died Brighton.

His son Louis Baron was created a Baronet in 1930, and was presumably addressed as 'Sir Baron'.

This section lists the memorials where the subject on this page is commemorated:
Bernhard Baron

This stone was laid on 9th April 1929 by Bernhard Baron Esq. through whose ge...