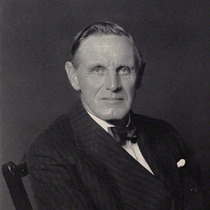 Wealthy soap magnate and Liberal MP for Warrington in Cheshire. Married Domini Elliadi, a Greek tennis champion and millionairess, and in 1912 they bought Parkfield in Highgate from Walter Scrimgeour which, 1913-20, he effectively rebuilt as Witanhurst, London's second largest private residence. (The other being Buckingham Palace). Led the campaign between 1918 and 1925 to preserve the Kenwood estate from development. Adoptive father of his wife's cousin, Paul. Lost a vast amount of money and died falling out of the Marseilles-Genoa express.

2019: At London Hellenic Prize we found: "Domini Crosfield (née Iliadi) provided a matchless halfway house in Highgate for David Lloyd George and Eleftherios Venizelos to sketch out the Treaty of Sevres which would end the First World War with the Ottoman Empire."

2022: Wikipedia gives: "Witanhurst was bought by the family of the Russian billionaire Andrey Guryev through an offshore company called Safran Holdings, located in the tax haven of the British Virgin Islands for £50 million in 2008."

This section lists the memorials where the subject on this page is commemorated:
Sir Arthur Crosfield

This unusual EH plaque is the work of Richard Kindersley.

We think Robert is the stepson of Lady Jane Rayne.