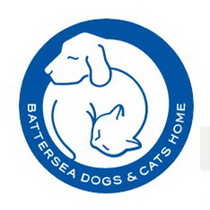 Founded by Mary Tealby in 1860 as the Temporary Home for Lost and Starving Dogs.

She established a place where people could send lost dogs from the streets and where their owners could retrieve them. It included space for exercising the dogs but was very much a temporary place of refuge, not a permanent home nor a hospital.

The precise location of the home varies slightly depending on source. All suggestions are in the area immediately south of Tealby's home in Victoria Road, now Chillingworth Road. Refer to this 1896 map, the nearest in date that we have found.

The plaque specifies that the home was just north of Sheringham Road, which at the time was Westbourne Road East. The Oxford Dictionary of National Biography gives St James Road as the address. This is now MacKenzie Road.

Describing the 1860s development of this area British History On-line says that the dogs home was established in Hollingsworth Road, "... in stables behind nos. 15 and 16 ...". The 1896 map shows a Hollingsworth Street joining what are now MacKenzie and Sheringham, and running just to the west of the building with the plaque. This is the most detailed location that we have come across and we find it the most convincing.

British History Online continues: "After her death in 1865 the home was carried on by a committee which included her brother the Revd. Edward Bates. Although ridiculed by press and public, the home received benefactions and by 1869 was admitting an average of 850 dogs a month, with c. 200 kept there at any one time. Complaints about the noise in a residential area prompted a move in 1871 to more suitable premises, where the enterprise became the Battersea Dogs' Home."

In 1871 the home moved to its current site on Battersea Park Road.

This section lists the memorials where the subject on this page is commemorated:
Battersea Dogs & Cats Home

Racing Manager to Queen Elizabeth from 1969 until his death.  A very close fr...

A tortoise with a comparitively short life.  We have to own, our picture does...