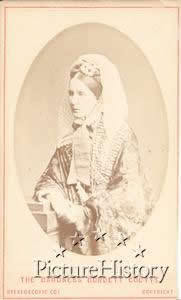 One of the great Victorian philanthropists who sought to rid London of its slums. Also one of the richest women in Britain in the mid 19th Century, widely respected for her undying generosity and piety, she was known as the 'Queen of the Poor' and 'Nursing-Mother of the Church of England'. She funded Livingstone's expeditions to Africa, helped set up the NSPCC, closely involved with the RSPCA for many years, was the first woman to be a member of the Royal Society,  the first to receive the Freedom of the City of London, the first to be given a peerage on her own merit, in 1871. Died at Stratton House and was buried in Westminster Abbey in honour of her charitable services.

Her parents were Sophia Coutts ((1775–1844, the youngest of 3 daughters) and Sir Francis Burdett, Baronet (1770- 844, MP), but her great wealth came from her maternal grandfather, Thomas Coutts, the banker, via his second wife Harriot Mellon (1777-1837). Harriot, a young actress, met Coutts when he was 70 (can you see where this is going?). He was married but set Harriot up financially and in society. On his wife's death in 1815, just 4 days after the funeral, he married Harriot, to the dismay of his daughters, and on his death Harriot inherited his entire fortune, having promised to ensure his family were looked after. 5 years a widow, at age 47 she married again, to the 26-year old William Aubrey de Vere Beauclerk, ninth Duke of St Albans (1801-1849). She greatly increased the Coutts fortune and, having no offspring herself, she chose Angela, one of Coutts' descendants by his first wife to inherit the bulk of the wealth. In 'The Story of Holly Lodge', 2009, Margaret Downing explains that Angela was "the only member of the family with whom she {Harriot} had enjoyed a close friendship..." As stipulated in Harriot's will, Angela added her grandfather's name to her own and, at 23, became the owner of Coutts bank.

She had had a conventional upbringing with a governess, Hannah Brown, who became her companion and friend and partner for over 50 years. Together they repelled many suitors/gold-diggers but her proposal to the Duke of Wellington (aged 77) when she was 32 suggests they had strange criteria in their search for her matrimonial partner. It was only when she was 67, after Hannah's death, that loneliness caused her to marry the 30-year old American, William Lehman Ashmead Bartlett in 1881 (who, incidentally, was an Old Cholmeleian, an old boy of Highgate School). The marriage caused a scandal but it lasted 25 years, until her death and seems to have been a happy one. He took her name, became an MP and a horse-breeder. She entertained lavishly at both her town house, 1 Stratton Street, and at her Highgate home, Holly Lodge.

In 2006 the British Library obtained letters between Angela and her sister, appropriately named Clara Money, which shed new light on the circumstances surrounding her marriage. Harriot's will (remember Harriot?) stipulated that Angela should not marry a foreigner. Clara considered the American Bartlett to be so inappropriate as a brother-in-law that she invoked this clause and successfully claimed three fifths of Angela's income. She and her son, Francis, took the surname Money-Coutts.

Susan S. Lewis’s 2012 dissertation provides some interesting information. As well as the London fountains Coutts also erected a fountain in Manchester and the memorial fountain to Greyfriars Bobby in Edinburgh.

This section lists the memorials where the subject on this page is commemorated:
Baroness Angela Georgina Burdett-Coutts

This section lists the memorials created by the subject on this page:
Baroness Angela Georgina Burdett-Coutts