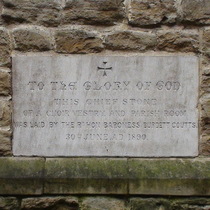 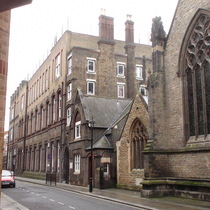 To the glory of God this chief stone of a choir vestry and parish room was laid by the Rt. Hon Baroness Burdett Coutts.
30th June AD 1890

St Stephens was erected in 1847-9, designed by Benjamin Ferrey, and funded by Angela Burdett-Coutts. The small south chapel of 1904 is very ornate. But we can find no more information about the 1890 extension.

This section lists the subjects who helped to create/erect the memorial on this page:
St Stephen's extension

This section lists the other memorials at the same location as the memorial on this page:
St Stephen's extension

This plaque is on the central cotagey-looking building which looks undamaged....

The nice lady in the shop told us that it is a 2 metre square white marble we...