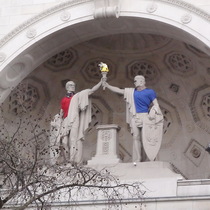 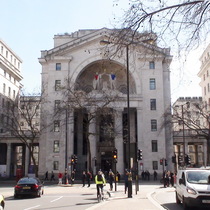 {In the frieze below the statues' feet (annoyingly outside our photo)}:
To the friendship of English-speaking peoples

Our photos was taken during a 2018 exhibition 'The Classical Now' during which these two muscle-men came over all modest.

The 2 huge figures are Youth by Malvina Hoffman (American), 1919, to symbolise the friendship between Britain and USA, the "friendship of the English-speaking peoples". The inscription was appropriate for an Anglo-American trading centre but not for the BBC World Service which famously broadcasts in many languages.

On a visit to Bush House in 2008 we were told that the names of some US presidents are carved behind the figures high on the facade facing up Kingsway and there were photos displayed on the stairwell which supposedly showed the names being carved, but we have found no further evidence. Londonist even have a photo of the statues from behind (how do they get this access?) but no names are visible.Unless someone can help we will have to assume that we were given faulty information.

This section lists the other memorials at the same location as the memorial on this page:
Bush House - US Presidents, possibly