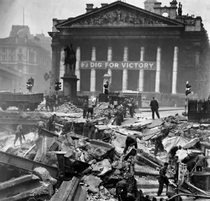 The bomb hit the booking hall, with the blast travelling down the stairs and escalators to the platforms, killing many people who were sheltering there. The huge crater had to be covered with a Bailey bridge for the traffic to pass over, and the station was closed for two months. We have found several sources which say that the number of deaths was 111 but the recent TfL plaque at the station says that there were 56 fatalities.

This section lists the memorials where the subject on this page is commemorated:
Bank Station bomb

Isle of Dogs - Past Life, Past Lives is an excellent post about this event, w...