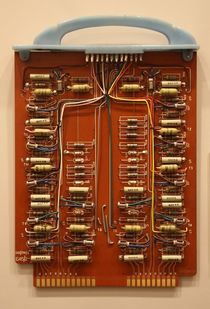 The world's first business computer was built and operated by J. Lyons & Co.

The LEO website provides:
In October 1947, the directors of J. Lyons & Company, a British catering company famous for its teashops but with strong interests in new office management techniques, decided to take an active role in promoting the commercial development of computers and build their own digital computer. In 1951 the LEO I computer was operational and ran the world's first regular routine office computer job. The company LEO Computers Ltd was formed in 1954 and went on to build Leo II and Leo III computers. LEO II computers were installed in many British offices, including Ford Motor Company, British Oxygen Company and the 'clerical factory' of the Ministry of Pensions & National Insurance at Newcastle. LEO lll computers were installed in Customs & Excise, Inland Revenue, The Post Office and in Australia, South Africa and Czechoslovakia. LEO Computers Ltd merged with the computer interests of English Electric in 1963 to form English Electric LEO, and later, English Electric Leo Marconi (EELM). Subsequent mergers eventually found LEO incorporated into ICL in 1968, whilst the Bureau operation, based at Hartree House, combined with Barclays to form Baric.

Hartree House occupied the upper floors of the Whiteley department store in Queensway and, following his death, was named for Douglas Hartree, a scientist who helped develop LEO.

This section lists the memorials where the subject on this page is commemorated:
LEO - Lyons Electronic Office

The Royal Exchange was established by Thomas Gresham in 1566, following his, ...

The station took over an existing building, number 46, entrance and booking h...