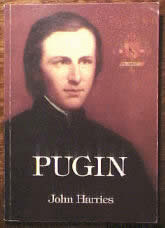 Born Bloomsbury. A treasured only child he had minimal education, never learning to spell. Indoctrinated by his father into the architecture of the Middle Ages, he became a religious fanatic who dreamed of turning Victorian Britain into a Roman Catholic kingdom and reinstating Medieval political and social arrangements. Church and theatre both inspired him: some of his interiors are more like stage sets, some of his own outfits more like stage costume and some of the flowing gowns that he designed for priests were too theatrical for the liking of church seniors. Believed that God had a particular fondness for pointed arches and so, with his adherence to the Gothic style was a prime cause of the end of Georgian architecture. Immensely prolific, in the space of two years (1838 - 40 he built or designed 18 churches, two cathedrals, three convents, two monasteries and several schools. He designed all the interior work for the new Houses of Parliament and also designed the tower of Big Ben. Married three times. Father of the architect Edward Pugin.

This section lists the memorials where the subject on this page is commemorated:
Augustus Welby Northmore Pugin