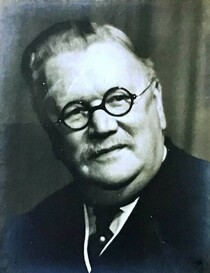 Chairman of the East End Maternity Hospital, 1902 - 1933.  His obituary in Medical News 6 January 1934 tells us:  Born Alfred Owen Lankester, brother to (the later) Sir Ray Lankester.  Died at home in Upper Wimpole Street.  He is described as having "great height, massive build and hearty manner" - we really wish we could find a picture.

2021: We wrote that back in 2014 and now Christine Wagg, "quite a distant relation", of Lankester has kindly sent a photo and we can see that Lankester meets his description.

Our colleague Andrew Behan, has also conducted some research in addition to that contained in the above obituary. Alfred Owen Lankester was born on 26 October 1859, his birth being recorded in 4th quarter of 1859 in the St James registration district, Westminster. He was the youngest of the eight surviving children of Edwin Lankester (1814-1874) and Phebe Lankester née Pope (1826-1900). His parents had a total of eleven children.

At the time of the 1871 census he was recorded as living at Walton House, 6 Burgess Hill, Hampstead, with his parents, six siblings: Phebe, Marion, Samuel, Edward, Nina & Jessie, a cousin once removed called Fanny Caine (b.1841), four visitors: Sidney Vatcher (whom his sister Marion would later marry), Reginald Templer, Lawrence Templer & Charles Templer, together with a governess, a cook, two housemaids and a page.

In the 1881 census he is shown as a medical student living at 68 Belsize Park, Hampstead, with his widowed mother whose occupation was recorded as an authoress, two of his sisters: Phebe, who was listed as a Secretary, National Heath Society and Nina, who was a Post Office clerk, together with an 18-year-old boarding army officer, a cook a parlour maid, a housemaid and kitchen maid.

When the 1891 census was conducted he was described as a medical practitioner at 5 Upper Wimpole Street, Marylebone. Also living there was his mother who was recorded as being of independent means, his sisters: Phebe who was still the Secretary, National Health Society and Nina who was now a Principal Clerk at the Post Office, together with a cook, a parlour maid, housemaid and a kitchen maid.

On 12 May 1896 he was initiated as a freemason in the Rahere Lodge No.2546 which initially met at St. Bartholomew's Hospital, West Smithfield, before moving to Frascati Restaurant, Oxford Street, London. The 1901 census confirms that he was a surgeon still working and living at 5 Upper Wimpole Street, Marylebone, with his two sisters, Phebe and Nina, together with a cook a parlour maid, a housemaid, a maid and a kitchen maid.

The 1911 census shows him as general practitioner still living at 5 Upper Wimpole Street, with his two sisters, Phebe and Nina, two nieces: Nina Owena Lankester (1887-1980) and Caroline Phebe Holle née Lankester (1875-1935) who were the daughters of his brother Samuel Rushton Lankester, together with a housemaid, a maid, a cook, a parlour maid and a between maid.

This section lists the memorials where the subject on this page is commemorated:
Dr Owen Lankester

Founded St Bartholomew Hospital and Priory in 1123, including the church of S...

The badge was introduced as a successor to the former Nightingale Badge. It i...