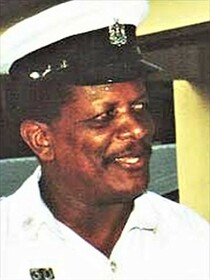 On the Hyde Park memorial Arthur’s name is given as ‘Arthur (Soul) Frederick’.

Arthur Edlin Frederick was born on 4 October 1944 in Grenada. He came to the UK in 1997 and was a museum's security officer living in Seven Sisters, north London. His obituary can be found on the BBC News website.

He died, aged 60 years, on 7 July 2005 when travelling in the underground tunnel of the Piccadilly Line on the London Underground Railway between King's Cross and Russell Square underground stations that was targeted by a suicide bomber. The narrative verdict of his death can be found on the Coroner's Inquest Report.

This section lists the memorials where the subject on this page is commemorated:
Arthur Edlin Frederick

The bomb which injured 48 people, was planted by neo-nazi bomber David Copela...

Andrew Behan has researched this man: Kenneth Gerald Salvesen was born on 1 O...

The Russian Imperial Romanov family were murdered in Ekaterinburg on the 4th ...