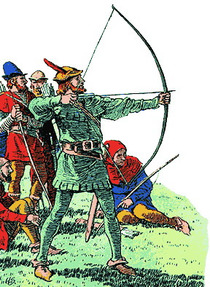 From the Norman period, at least, until the introduction of firearms in the 16th century, some version of the longbow was the long-distance weapon of choice.  The last recorded use in England seems to be in 1642.  One major advantage of firearms over longbows was that no significant training was required.   Skill with a longbow took years of practice which was at one time compulsory for all English men.  The Independent scotches the urban myth that this law is still in force:  “It’s true that every Englishman between 17 and 69 was once required to keep and practice with a longbow.  The skeletons of medieval archers are sometimes dug up with massive, deformed left arms from years of regular shooting.  But the Betting and Gaming Act of 1960 abolished mandatory practice.”  1960!

Military history provides more information including: “the longbow required extensive training to use effectively. To make sure that deep pool of archers always existed in England, the population, both rich and poor, were encouraged to hone their skills. This was furthered by the government through edicts such King Edward I's ban on sports on Sunday which was designed to ensure that his people practiced archery.   As the draw force on the longbow was a hefty 160–180 lbf, archers in training worked their way up to the weapon. The level of training required to be an effective archer discouraged other nations from adopting the weapon.”   And Think Quest says “1477, Edward IV of England banned an early form of cricket because it was interfering with regular archery practice.”

Anyway, lots of men needed to fire lots of arrows and since longbows had a range of up to 270 yards this meant that fields had to be set aside for the activity, even in those health-and-safety free days.  In heavily populated areas such as London quite a few archery fields would have been needed.  So far we’ve found memorials that mention three, but there were probably others.  Note: normally Butts would indicate an archery field but apparently Newington Butts probably gets its name from the alternative meaning: an odd corner of land.

Londonist has done some research into this early sport.

This section lists the memorials where the subject on this page is commemorated:
Archery practice