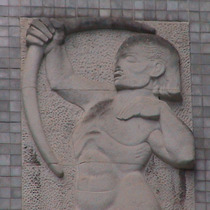 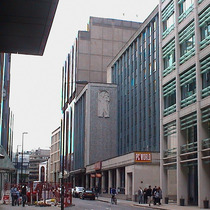 In 1315 a large area known as Bunhill Fields was leased to the City of London, probably to be used, amongst other things, for archery practice.  Eventually about two square miles of Islington fields were turned into the archery equivalent of a golf course with 194 targets.

In 1498, as the musket replaced the longbow, part of this area was made into an artillery ground. The Honourable Artillery Company still occupies the land it was granted then, north of this, 1950s-60s, building.  Its designers have referred back to the archery history with this bold, primitive relief.

We believe this area was known as the Finsbury Marks. See The Company of Roving Archers and the Bowyers Company which has a whole page on the history.

Longbow House was designed by Joseph & F. Milton Cashmore & Partners in the 1950s. We cannot identify the sculptor.

This section lists the subjects commemorated on the memorial on this page:
Chiswell Archer