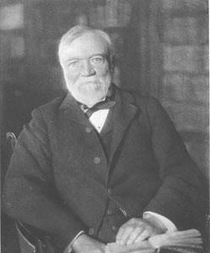 Industrialist, business magnate, and philanthropist. Born Dunfermline, Scotland in a one-room cottage. 1848 the family emigrated to Pennsylvania, USA. Only about 5 feet in height and garrulous, Carnegie entered the business world and became extremely wealthy, mainly through his steel empire. In the early 1900s he sold the Carnegie Steel Company for a huge amount of money which he then used for his philanthropic career. Unusually he was not motivated by religion but by social values.

His gifts included 3,000 public libraries (Carnegie Legacy England lists over 20 in London), mainly in English-speaking countries. He also created a number of institutions in Dunfermline and Scotland generally.  We've searched for, but not found, a list of the gifts that he made in London.

This section lists the memorials where the subject on this page is commemorated:
Andrew Carnegie

This building was the gift of Andrew Carnegie, AD 1905.

Born in Lancashire, where his father Ludwig had a factory.  Studied law and t...

London's docks were badly damaged by bombing during WW2, but managed a resurg...