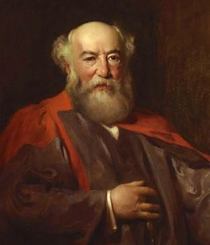 Born in Germany. Studied chemistry and then worked in factories, coming to England in 1862. Following marriage in 1866 Frida and Ludwig moved to England, had two sons: Robert (see the Infants Hospital) and Alfred, and became British citizens. In partnership with the industrialist John Brunner, Mond developed a means of mass producing soda crystals and caustic soda, and set up a very profitable factory (which, in WW1, being used to produce TNT was the site of the dreadful Silvertown explosion). Moved to London in 1884. Died at his London home, 'The Poplars', Avenue Road.

This section lists the memorials where the subject on this page is commemorated:
Ludwig Mond

Born in Lancashire, where his father Ludwig had a factory.  Studied law and t...