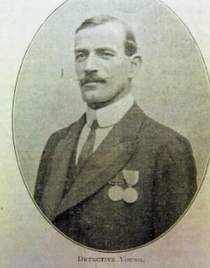 Aged 35, Detective Sergeant Young was shot dead on duty on 14 July 1915 while attempting to arrest a man with a gun. Buried in Hampstead Cemetery, Fortune Green.

From Met Police: "Alfred had been shot in the chest as he attempted to arrest retired army captain, Richard Gorges at his home in Mount Vernon, a narrow lane in Hampstead. Gorges was wanted by police in connection with “indulgence in illegal sexual practices”. Alfred was shot at around 22:00hrs and died a short time later.  Having been widowed in 1911, he died leaving a fiancée and a six-year-old daughter.  The coroner at the inquest was told by Alfred’s colleague, Detective Sergeant Askew, who was also present at the incident: “He aimed at Young and fired from a distance of about a foot. Young momentarily continued towards Gorges before suddenly falling back and downwards, ending up headfirst at the bottom of the stairs. Sgt Askew told the coroner he grappled with the accused and restrained his right arm which was still holding the revolver. Gorges was tried at the Old Bailey for murder three months after the shooting but was acquitted on the grounds that, because of his drunken state, he would have been incapable of intending to kill. He was, however, convicted of manslaughter for which he served 12 years’ imprisonment. He was released from HM Prison Parkhurst in 1925 before his death in 1944, aged 69. DS Askew was awarded the King’s Police Medal in 1917 for successfully disarming Gorges and preventing any further loss of life, the same award that Alfred had received in 1909 for arresting an armed burglar the previous year."

More information at Find a Grave.

This section lists the memorials where the subject on this page is commemorated:
Alfred Young

This plaque was found packed away when the building was being cleared in 2013...