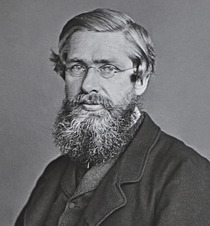 Explorer and naturalist. Born Monmouthshire (which, if we can believe Wikipedia, between 1542 and 1974 was not definitively in either Wales or England). Joined the family surveying business and learnt a number of technical trades. He also developed an interest in natural history and was a teacher for a time. In 1848 he began a series of expeditions to the Amazon and the Malay peninsula which lasted until 1862.

While abroad he developed the theory of evolution through natural selection independently from Darwin. At a meeting of the Linnean Society in July 1858 two papers on the theory were read: one by Darwin and one by Wallace. For a number of reasons (such as modesty and deference) Wallace allowed Darwin to be credited with the theory. But, as the founder of bio-geography, he does have a line named after him: the 'Wallace line'. His studies enabled him to spot that species in Australia and Asia, either side of the line, had differences that would not be expected given their geographical closeness. His explanation involved sunken continents but we now know that plate tectonics are the reason.

Wallace returned to England, formed a friendly relationship with Darwin and continued his scientific researches and writings. Travelled the US on a lecture tour. Previously an agnostic, in 1866 he publicly endorsed spiritualism and through his writings became an accepted authority. Other unusual interests include his presidency of the Land Nationalisation Society (which wanted a more equitable ownership of land), his support of the anti-vaccination movement and his opposition to the possibility of extra-terrestrial life. Always interested in the subject, in 1889 he declared himself a socialist. Died Broadstone, Dorset, where he had moved in 1902.

This section lists the memorials where the subject on this page is commemorated:
Alfred Russel Wallace

Born Bedford. Inherited the title from his father, the first Viscount, in 186...