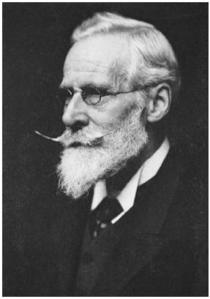 Chemist, physicist and science journalist. Born 143 Regent Street, presumably in a residential apartment above his father's gentlemen's outfitters shop in the Nash-designed terraces. Worked on spectroscopy and pioneer of vacuum tubes. Invented the Crookes tube and the Crookes radiometer. Discovered the element Thalium. His cousin, Charles Crookes, designed the gates for the Great Exhibition.

In the 1870 and 80s his studies into spiritualism led to him concluding that mediums were indeed communicating with spirits, including his dead wife, and he maintained that position, never apparently wavering. This has variously been put down to gullibility, shame at having been fooled initially, an affair with a medium and poor eyesight. Crookes liked to demonstrate his beliefs by joining groups: the Society for Psychical Research, the Theosophical Society, Ghost Club and the Hermetic Order of the Golden Dawn.

We should mention the 'Sir William Crookes Spiritist Society' - this is a registered charity, with a charity shop, that lists its activities, at the Charity Commission, as "Study, prayer and spiritual healing". "Spiritism" is a spiritualistic philosophy and religion codified in the 19th century. We now know more about that subject that we need so will stop there.

This section lists the memorials where the subject on this page is commemorated:
Sir William Crookes