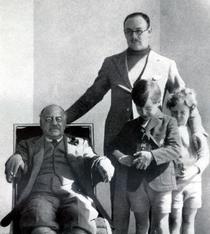 Born in Lancashire, where his father Ludwig had a factory. Studied law and then entered his father's business as director.  Liberal and then Conservative MP 1906-28. In 1926 he achieved the merger of four companies to form ICI, the largest manufacturer in Britain. The companies were: Brunner Mond (his father's), Nobel Explosives, the United Alkali Company, and British Dyestuffs Corporation.  Mond died in his London home 35 Lowndes Square.

Alfred is seated in the photograph with his son, Henry, and grandsons.

This section lists the memorials where the subject on this page is commemorated:
Alfred Mond, Baron Melchett