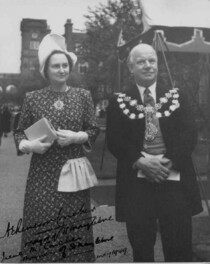 Alderman Mayor of St Marylebone, November 1947 - May 1949, for 10 years a London County Councillor. Founder President of the St Marylebone Society.

Andrew Behan has kindly provided this research; He was born as Alfred Edwin Reneson Coucher on 24 June 1892 in Marylebone, the elder son and the seventh of the eleven children of Arthur Thomas Coucher (1862-1936) and Anne Maria Coucher née Goater (1859-1937). His father was an estate agent & surveyor and his birth was registered as Alfred Edwin Reneson Coucher. He was baptised on 11 September 1892 at St Mary's Church, Bryanston Square, Marylebone, and the baptismal register records him as Alfred Edwin Croucher with his family living at 20 Dorset Street, Marylebone, his father's occupation being given as a superintendent of insurance agents.

On 26 August 1895 he attended Marylebone Central National School and was registered as Alfred Coucher, living at 45 Dorset Street, Marylebone. He left this school and on 11 June 1900 he was admitted, as Alfred Edwin Coucher, to St Mark's School, Hamilton Terrace, St John's Wood as the family were by then living at 12 Northwick Terrace, Maida Vale. He remained at this school until 18 January 1904.

The 1911 census shows him as Alfred Reneson Coucher, an estate agent's assistant, still living at 12 Northwick Terrace, with his parents, seven of his siblings and a female domestic servant.

He enlisted as a private in the Inns of Court Officers Training Corps and the London Gazette shows him listed as being made a Second Lieutenant in the Royal Garrison Artillery, North Midland (Staffordshire) with effect from 29 September 1915. The 1918 electoral register shows him as Captain Alfred Edwin Reneson Coucher at 2 St John's Wood Road, St John's Wood. He later obtained the rank of A/Major and the London Gazette of 23 December 1918 confirms he had been Mentioned in Despatches whilst attached to the 112th Heavy Battery of the Royal Garrison Artillery and he was awarded both the British War Medal 1914-1918 and the Victory Medal.

On 13 September 1919 he married Irene May Walker (1897-1963) in Abingdon, Berkshire, and they went to live at 51 Butler Road, Harrow, Middlesex. On 3 August 1923, their daughter, Jean Reneson Coucher (1923-2010) was born. Electoral registers from 1920 to 1926 show him as Alfred Edwin Reneson Coucher (Major), entitled to vote in the Borough of St Marylebone local elections, together with his father, as they had business premises at 29 Great Quebec Street, London, that telephone directories of the period confirm was A. T. Coucher & Son, Surveyors and Estate Agents. Both he and his father were able to vote in local elections from 1924 to 1926 as they had property at 59 Fisherton Road, London, NW8 and the electoral registers again show him as Major Alfred Edwin Reneson Coucher.

During the war he was the Chief Air Raid Warden for the Borough of St Maylebone. After the war he was shown on electoral registers as Alfred E. Reneson Coucher at 25 Melcombe Court, Dorset Square, London, NW1

Probate records again show him as Alfred Edwin Reneson Coucher O.B.E. and that when probate was granted to his widow on 28 February 1956 his estate totalled £31,944-0s-11d.

The 1949 photo shows him in mayoral regalia with his wife.

Andrew adds: "There is some confusion as to the correct name of this man. The memorial stone at Old Church Garden, Marylebone High Street, clearly gives his name as Alfred Edward Reneson Coucher and this name is confirmed in the London Wiki page. However, many public records that I have traced give his name as Alfred Edwin Reneson Coucher, the London Gazette in which he is listed as being made a Second Lieutenant in the Royal Garrison Artillery, North Midland (Staffordshire) with effect from 29 September 1915 having been a private in the Inns of Court Officers Training Corps. The Imperial War Musuem lists him as Alfred Edwin Reneson Coucher with regards to the 15 reels of film he took.

This section lists the memorials where the subject on this page is commemorated:
Alfred Edward Reneson Coucher, OBE

On the curved wall at the entrance to the garden.

A member of the Executive Committee for the Great Exhibition 1851.Born Kingla...