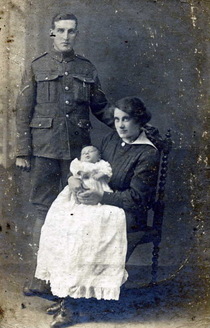 Our colleague Andrew Behan has kindly researched this man: Auxiliary Fireman Alfred Edward Minter was born 15 November 1894 in Penge, Kent, one of at least twelve children of Thomas Henry Minter and Frances Emily Minter née Bailey. His father was a House Painter. The 1901 census shows the family living at 14 Eveline Road, Penge and the 1911 census shows that they had moved to 65 Arpley Road, Penge and his occupation was shown as a House Painter, similar to that as his father. On 28 June 1915 he enlisted in the 226th (Field) Company, Royal Engineers, and gave his home address as 65 Pawlayne Road, Penge. He embarked for France on 17 November 1915 and was promoted to Lance Corporal on 27 September 1916. He was injured, suffering gun shot wounds to his left shoulder, left leg and left thigh which resulted in him being returned to England on 4 June 1917.

On 23 September 1917 he married Annie Florence Shirley in Bromley, Surrey and they lived at 30 Tennyson Road, Penge. He was eventually discharged from the army on 6 February 1919 as no longer physically fit for service and was awarded a Silver War Badge, in addition to the 1914-1915 Star, the British War Medal 1914-1918 and the Victory Medal.

The 1939 England and Wales Register shows that they were living at 48 Aylesford Avenue, Beckenham, Surrey and his occupation is listed as House Decorator (Foreman). He joined the Auxiliary Fire Service and was attached to the Stanhope Grove Fire Station, Beckenham. He died when a German bomb landed on Auxiliary Fire Service Sub Station 24U, which was housed in Old Palace LCC School, St. Leonards Street, Poplar, aged 46 years, on 20 April 1941. He was buried at Beckenham Cemetery and Crematorium, Elmers End Road, Beckenham, BR3 4TD. Administration of his estate was granted to his widow and his effects totalled £810-6s-0d.

The photo shows Minter with his wife and baby.

This section lists the memorials where the subject on this page is commemorated:
Alfred E. Minter