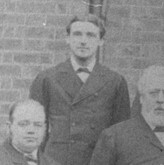 J.P. and member of the Electric Lighting and Tramways Committee, West Ham, 1905.

'Post-primary education in West Ham, 1918-39' by Kim Lorraine O'Flynn refers to an Alderman, and later, Councillor, W. Crow, an "important figure in 1920s West Ham politics. He had been born in 1858 and from the time he was elected to West Ham's first Borough Council as a young man until his defeat in the 1929 elections, ' hardly a week went by when his name was not mentioned in the Stratford Express'. In a memoir published privately his son .. Councillor Crow represented Broadway ward ..".

The memoir is: 'A Victorian gentleman and his family' by A. Crow, held by the Local Studies Library. L B of Newham.

This section lists the memorials created by the subject on this page:
Alderman W. Crow

Poplar councillor imprisoned during the 1921 rates protest, at which time she...